About Us
Luvenia Ezell the owner of Concrete Rose Scrubs boutique, came up with the idea of opening her own scrub boutique while working as a CNA. She knew personally how it felt to struggle being a single mom to two boys and working as an aide. With no help from their father, she had to depend on her family and friends for the help and moral support. Often finding herself crying at times because she could barely afford anything for herself, she knew that something would have to change. A nurse at a facility that she was currently picking up per diem shifts with at the time, mentioned to her about going to nursing school. Luvenia enrolled in the LPN program at ECPI in May 2015 but had to take a leave of absence due to not being able to work and attend school at the same time. During the six months that she took off, she became a Float CNA throughout a hospital system where she was able to make her own schedule. Once she was able to get herself back together, Luvenia returned to the Practical Nursing program summer of 2016 and was able to graduate the following May. Luvenia knew that she wanted to open her own medical uniform store but didn't know where to start. After a failed attempt, Luvenia contacted each company and from there she was able to reopen Concrete Rose Scrubs and Apparel. 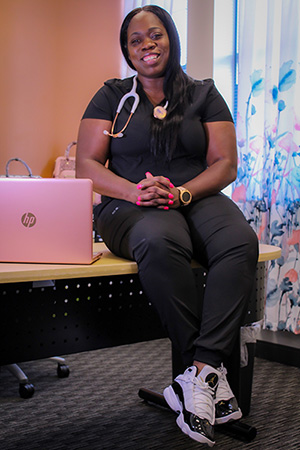